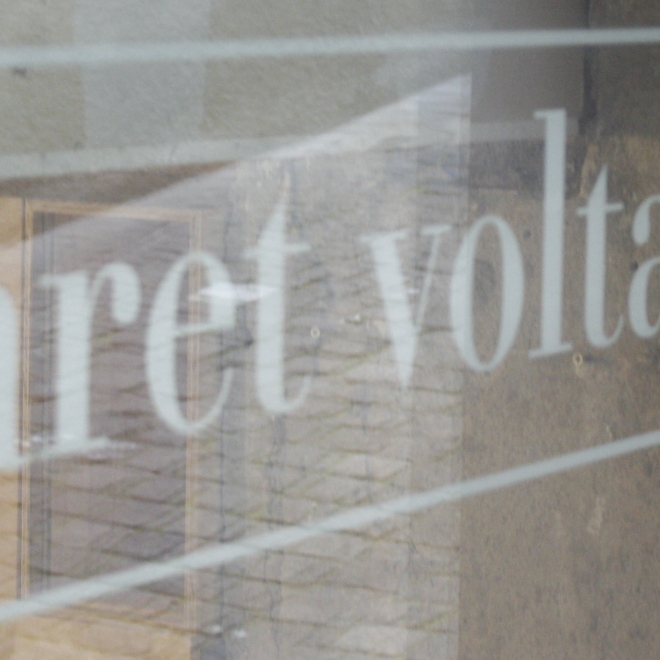 Dada at the source, our duty in its wake

First appeared in The Woolf
Winter 2016
Notes from the Unexpected

Monument, rabble-rouser, watering hole, hub – but the most common description of Cabaret Voltaire is the one uttered outside it. If the windows are cracked in the offices upstairs, director Adrian Notz hears “the birthplace of Dada” on some kind of surreal loop: a different voice, volume and accent, but always the same words. And then comes the hard part, when the speaker is pressed to explain.

“Dada’s never been defined and it’s been defined 1,000 times,” Notz wryly puts it, before going on to try. “Dada is to question everybody and everything…”

Dada is also: to go in between things and loosen them up, and to go into the pivot. It’s a cultural movement and an ever-changing goal. A fight for the freedom and autonomy of art. And, above all, an attitude. Notz admits this complexity is a bit problematic in an age of sound bites. Back in 1916, things were different. Or were they?

Switzerland is a birdcage, surrounded by roaring lions, wrote Hugo Ball, Cabaret Voltaire co-founder and creator of the Dada Manifesto. In a time of war, the movement could only have come about in the haven of a neutral land. Notz adds, “Maybe Dada couldn’t have happened in another place because the drive of the city was too high to find the groove. If you didn’t have to fight for your survival, you could let go, let loose and create.”

Jump forward a century after the start of Dada, tacking on the months Cabaret Voltaire has spent commemorating it, and the situation outside the borders is not as… dire?

He continues, “In a way, we have an obligation here in the ‘spa’ of the world. If we have this luxury, we should actually start thinking and experimenting, and try to re-use the thoughts for places where there is struggle.” For Cabaret Voltaire, the aim is to go from passive to active resistance, by creating an art space around Kurt Schwitters’ vision of total artwork and leaving the past behind.

“People could touch the walls and it would be enough, but because of the legacy of Dada, we have to do more.”