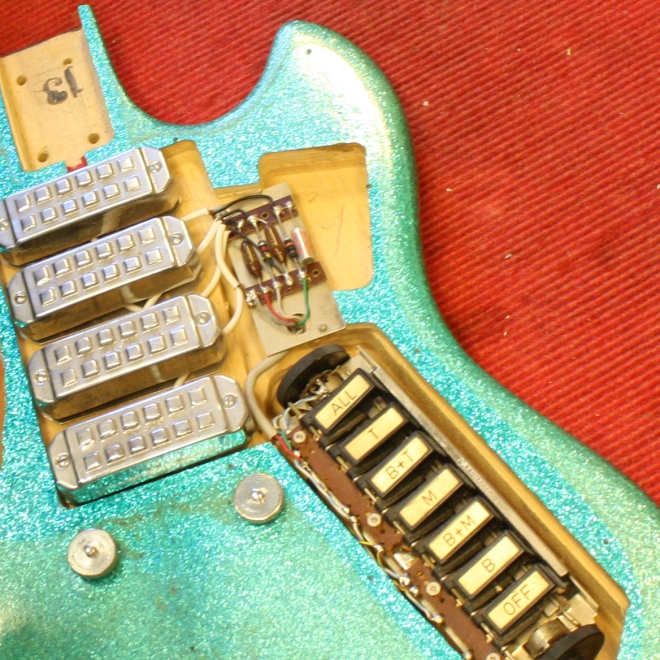 Where guitar dreams are made and broken

First appeared in The Woolf
Autumn 2014
Notes from the Unexpected

Down in the basement, where half a dozen guitars hang in the corner like spiders, Gitarren Total general manager Patrick Geser and I are talking metal – or, more precisely, nickel, chrome and whatever else was galvanized for weapons and parts in this very space. That was a long time ago, back when rock ‘n’ roll was new and few of the amplifiers now stacked against the cinderblock had reason to exist. The room is still equipped with Cold War-era dials and knobs and enough power, as Patrick puts it, “to blow up the Eiffel Tower,” but today it serves a different industry. Not that anyone around here would call it that.

“Certain sounds can’t replicate very easily,” Patrick continues, delving into a comparison of tube amps with the more modern transistor and digital models. After a cheerful tangent about the U.S. Army’s radio transceivers, he pauses, maybe aware of my struggle to keep up. “Every single thing you see here,” he finally says, “somebody really likes.”

This is both understatement and code. Only a steady surge of earnest, pre-Facebook likes could have taken a business that started off “repairing crap guitars” this far. It is also clear that somebody may very well include the people who work here, all serious guitar players involved in multiple bands. Patrick has cut back to two, what with his ten hand operations and re-prioritization around work and family, and they both are doing well. His punk band even opened for Dead Kennedys’ legendary frontman Jello Biafra a few weeks earlier, though this he only mentions when I comment on his shirt.

“It’s really terrible music,” he says, quick to keep my awe in check. “We only do two or three gigs a year because nobody wants to hear it. It’s not like one-two-three-four dugga dugga dugga dugga… But it’s a lot of fun to play.”

We wind past the bass nook and guitar-case cranny, which used to store the building’s coal until Patrick cleared it out. A few steps further, and we’re in the place where fantasies are fueled. Hundreds of guitars climb the walls and catch the light, each burning with promise. After another factual interlude about technology in the service of craftsmanship, Patrick informs me, with no less authority, that guitars get “mojo and soul” only after years of play. They can lose it, too.

“Some of my guitars I put away for two or three years… I can’t get a sound out of anymore. Even if I toured with one for a few years, if I take it out of the case today…” he pretends to gag, “I can’t play it.”

“Maybe you’ve changed,” I offer. “Or do you think the guitar has?”

He stops, quiet for the longest stretch since my arrival. “Well, yeah. Both. Absolutely.”

In the workshop one floor up, the Les Pauls give way to orthopedic shoes and fumes. Duncan James and Tyko Runesson are on duty today, tending to repairs in uncustomary silence. Duncan, who grew up fixing his guitar with fork and knife, first came to Gitarren Total with a broken neck – his guitar had been caught in the unforgiving doors of the Paris metro. That was fifteen years ago, and he joined the team not long after.

He is hunched over the task at hand, which involves an Allen wrench and a Rickenbacker pick-up. The job is one of the 1,500 the team handles every year, though a few are turned down at the door.

“(It’s) when a customer asks for something that’s against our ethic,” Duncan explains, eying the shelf where the disabled guitars line up like patients. “He brings in a really nice old vintage piece and says, ‘I want this repainted…’” Duncan gives me a moment to grasp the severity of the offense. “But, no… You’re only borrowing that guitar while you’re here on Earth, and when you’re gone that guitar will go to somebody else. So, if you go and do that to it now, you’re destroying it.”

This comes across more as hard-earned wisdom than bluster. Like Patrick, Duncan and Tyko have been playing in bands and overlapping side projects for years. Duncan says, “Here, you have to.”

Tyko, who builds acoustic guitars and folkdances on the side, agrees. “Then you know when it’s finished. Otherwise you have no real feel for it. By the book, it’s not enough.”

Duncan adds, “You’re always holding some kind of Platonic ideal of what a particular model could and should sound like, and you’re comparing it to the one that you’ve got in your hand…” He points to the table. “I’ve got a pretty good idea of how that Rickenbacker should sound, and I won’t be guessing. Everybody here has amassed a huge library of sounds in their head.”

Tyko begins dismantling a sparkly turquoise number near the window, and Duncan walks over to take a look. Tyko gingerly probes the innards and points out the jack plugs, not unlike those used in old telephone switchboards.

Duncan goes back to the pick-up. Over the pulse of soldering, I ask him what a good day is.

“A good day is getting up in the morning and, while I’m eating my cornflakes, I’m thinking, ‘Oh, yeah, I’ve got to do that today,’ and I’ll immediately start thinking about it with a little part of my brain. And when I get here, I pick up the guitar and it’s just a complete, seamless kind of transition from coming to work and picking up the thing. You know exactly what you’ve got to do with it and you’ve actually planned the whole thing out. But I guess practically every day’s a good day.”

The soldering stops. Tyko lifts the jack plug to his face and squints. For a few seconds, the only movement comes from the swaying leaves outside the window. All these tools and scraps, all these machines and parts – but, sooner or later, it’s only about wood and wire and, in the right hands, the power of something much harder to name.