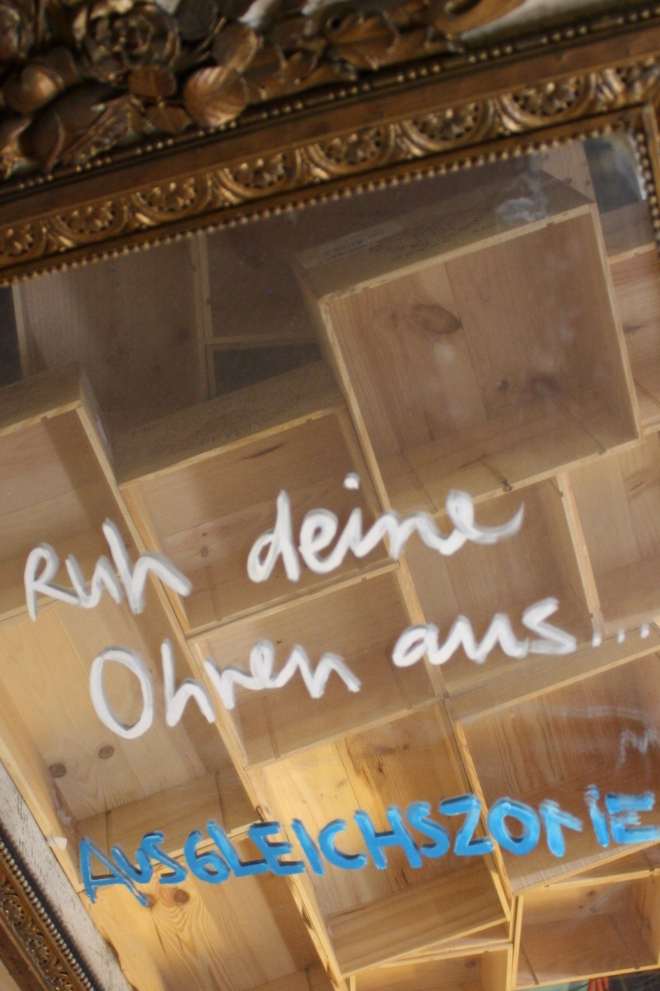 First appeared in The Woolf
Summer 2015
Notes from the Unexpected

Under the glare of tube lighting, down the stairs off backstage left, the casualties from the weekend wait their turn. A red velvet stool rests on a table, its foot glued and clamped. Above a tangle of broken chairs, three chipped disco balls sag like rotting fruit. If the furniture could speak, oh, the tales! Then again, it’s just another day here in the Kaufleuten workshop – another reminder that for all the excitement of a Kaufleuten night, there’s always a morning after.

“Something’s usually not working,” says Corina Freudiger, laughing but wary of the crystal chandelier that has been temporarily jacked up between a ladder and a speaker stack. The head of Kaufleuten’s cultural events and I are now in the concert hall, one of the lush spaces she and her team aim to fill – at least before bedtime. The Kultur department isn’t responsible for the nocturnal shindigs of the famed club, but rather the 200-odd concerts, author readings, cabarets and heady discussions the venue hosts each year. Ever since Lenin, Joyce and the Dadaists graced the stage nearly a century ago, Kaufleuten has been pulling in a mix of hotshots, rookies and loose cannons. And then there are the performers.

From Patti Smith and Cat Power to Michael Ondaatje and Amélie Nothomb, Kaufleuten has a knack for booking legends, sometimes before they’re called that, but anything can happen when the lights dim. Meltdowns, mutinies and flashes of soul-searing perfection are possible on any given night, even the same night. Wing nuts in the audience, an impromptu striptease on stage – Corina has seen a lot over the years and, clocking in at over 40 events, so have I.

And yet, there are no regrets. It’s part of, as Corina puts it, the “magic of the live moment,” if not the strategy. Kaufleuten, after all, is a business.

“We’re here to entertain people at a high level,” she explains, but later cracks a smile and adds, “I would like to experiment more, especially when it comes to the readings. I think a writer’s words are between the reader and the writer, but how you present the writing is important. It doesn’t always have to be the author on stage, telling the audience ‘the truth’… I mean, when people come here for two hours, something has to happen.”

The urge to liven things up also goes for concerts, and not only to compensate for the glut of backstage requests for vegan and non-alcoholic fare. Audiences are changing too and, for some, maybe an old-fashioned rush of euphoria no longer cuts it. This could explain the rise in themed events, such as the open-air literary festival in the Old Botanical Gardens (co-run with the Literaturhaus) and the new three-day offshoot of Zermatt Unplugged.

All good, so long as I can still get my swirl of velvet, brass and beer straight from the bottle while art – or someone’s vision of it – unfolds and explodes across the room. Corina says just as much: “Glamour is part of the Kaufleuten myth, but messy is interesting.”